Posted on February 13, 2010 by Drachenfutter

Someone wrote that all great stories begin with the sea.   And if they didn’t, they should have.

Whether in Micronesian balsa-wood rafts crossing the Pacific or Portuguese caravelas crawling across the Atlantic, untold millions re-started their lives with that first step over a gunwale or up a gang plank.  Discarding the known, regardless of its comfort and certainty, they opted for the unknown lying beyond a figurative – and actual – horizon.   By stepping aboard, one could leave behind three – War, Famine, Pestilence – of the Four Horsemen of the Apocalypse, thus postponing – perhaps – the fourth (Death).  Given that simple calculus, it’s not surprising that so many made that choice, which culminated in the great migrations of the late 19th through the mid-20th centuries.

For my parents, having already decamped China for Hong-Kong after the Communist takeover in 1949, the move from that relative calm and prosperity was based on wanting better life opportunities for me, their only child.  I, being barely four years old, I had no vote.  My life, at the point when the decision was made, was simply happy and happily simple.

All that would change with that first step onto the M/V Tegelberg. 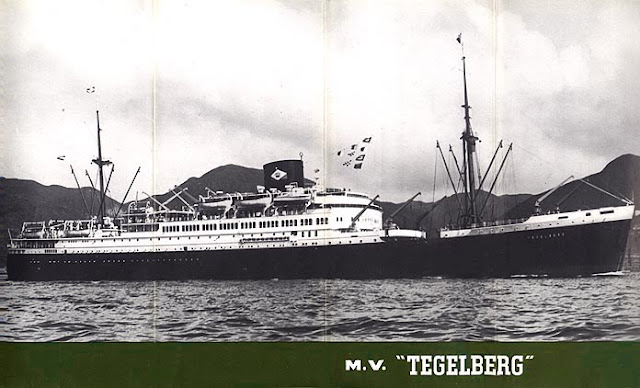 Yet, there is at least one thing for which I am grateful amongst all that has followed in the intervening half-century: the trip itself, a 42 day, 10,660 nautical mile crossing of two seas (South China and the Andaman) and two oceans (Indian and South Atlantic) on the way to Rio de Janeiro, Brazil.

My memories of life in Hong-Kong pre-voyage are fragmentary, fading, and suspect.  I can no longer distinguish between real memories, where recall means reliving the experience, and those formed from tales told by others.  Thus, while I have internal “movies” of events – jumping up and down on my parents’ bed; hiding under it to fly a kite; being fussed over by mother’s students; crying hysterically seeing the basket of toys to be left behind; ripping up part of my father’s postcard collection; playing with the silver airplane Grandfather Lee had given me (photo) – I can’t feel whether I am in it or watching myself be in it.

This is why the voyage aboard the M/V Tegelberg matters: it formed the first set of memories about which I am absolutely certain.

I can close my eyes and be playing again on the upper bunk in our cabin or standing on deck pool-side scared of Neptune and his trident during the Equator-crossing ceremony.  It’s why rediscovering my father’s pocket diary from that year (1956) and finding entries for many of days of the 42-day trip has been so satisfying and exciting.   I now have specific dates as anchors for the events that constitute my first irrefutable set of memories.  This combination of dates, photos, memories, facts and objects associated with the M/V Tegelberg give a concreteness to my first life-changing event in a way heretofore impossible.

In that twenty years between the end of WW II (1945) and the commercial Jet Age, when the Boeing 707 and its lesser-known competitors made long-distance flights affordable to the masses, passenger ships crisscrossing the oceans were the norm.   The M/VTegelberg and two sister ships were part of that fleet.  Of a good size – 14, 200 tons or so and almost two football fields long – they were built in 1938 to link the Netherlands with the Dutch East Indies (now Indonesia) and Asia.  All three ships served as Allied troopships during WWII, carrying as many as 2681 soldiers each and – amazingly – all three survived the war to become passenger-ships again.

Reconfigured for civilian comfort, the M/VTegelberg would carry 131 passengers in First Class, 84 in Second Class, and 179 in 3rd Class plying the Asia-Americas route until it was broken up  in 1968 in Taiwan for scrap.

The interior shots below show what it looked like then.

Through the wonders of eBay, I found, for sale from someone in Australia,  a set of coffee cups and saucers used on the Tegelberg and her sister ships and purchased them.  Here’s one:

In another posting there will be photos from that sea-voyage…

16 Responses to M/V Tegelberg: The Slow Boat FROM China…