Posted on September 16, 2008 by Drachenfutter

I named this entry “Surreal Shanghai” because of this photo, which, unfortunately, does NOT have an audio track. It epitomizes “surreal”.

The setting: lobby of the Westin Hotel at the Bund Center, my Shanghai “home” on these trips.
The time: 8:30 A.M. , and I am on my way to the breakfast buffet, which served both Western and Chinese dishes (oh joy!).
What: A jazz trio of three Chinese musicians dressed in WHITE tuxedos. At 8:30 A.M.!!

I heard an interview on NPR yesterday afternoon with a Yale senior whose claim to fame is that he spent a week or so in North Korea this Summer, including six hours roaming without a government “handler”. (Yes, six HOURS……wow… Yawn.)It wasn’t a great – or even good – piece of journalism: the kid had an uncritical eye and thus his observations were terribly banal and not at all illuminating about a society about which we know so little.

It reminded me, though, how any of us traveling anywhere are like the blind men trying to describe an elephant. We only know the little we touch and shouldn’t try to extrapolate to the bigger whole based on that little patch of knowledge.

Thus, this posting about Shanghai is NOT meant to be a “summary” of Shanghai neatly packaged and “explaining” the place. It’s the visual and experiential snapshots during my week there, from which you can draw our own conclusions, with (hopefully) minimal editorializing from me.

Go there yourself. It will astound, overload, humble, and both daze and dazzle. And, with any luck, inform you about why China impacts the US, for better or worse, in the ways that it does and will continue to. (Here’s how much I think it will impact. If I were having a child today in this country, I would make sure they learned two other languages besides English: Chinese and Spanish. With the former, the world will be their oyster; with the latter, they’ll be at home here as well.)

Shanghai’s waterfront along the Huangpu River is called “The Bund”, an Urdu word for “embankment” or “levee”, and it’s lined with Western-style buildings from the period when the Western Powers (France, England, Russia, Japan (!), US, Germany, and Belgium) held trade concessions – forced upon a weakened China in the last throes of the Ch’ing Dynasty during the late 19th and early 20th Centuries. The architecture is European, the buildings originally being commercial – banks and such – and a visible manifestation of the economic power they exerted in the China trade. They gave Shanghai a very distinctive look, which survived the Communist take-over in 1949.

On the bank of the river across from the buildings, there is a wide promenade with a fantastic view of the new(er) financial center of Shanghai, which is on the other side (photo above). This pedestrian walk from which the photo above was taken is chockful of strollers, hawkers of fake Rolexes, and, the most interesting sight, a guy with a clunker bicycle outfitted with a narrow 2 ft. rectangular firebox behind the seat, on which he grilled shisk-a-bobs of mystery meat!  Alas, he rode away, the glow of the pink embers visible snaking through the night crowd, before I could get my camera out.

Facing away from the river, the building with the “crown” is the Westin Hotel where I stay. In front of it, note the building with the flagpole and red (China) flag. It’s the terrace of a restaurant called “M on the Bund”, a very trendy place owned by an English woman, where I had dinner one night. You’ll see the flagpole and flag close-up in the photo below, taken while eating, with the “needle” tower in the background.

Yes, that’s Osama Bin Laden, made of painted dough and about 5 inches tall, sitting inside a shadow box. It could have been me, if I had paid to be so immortalized and had 20 minutes for the artist (?) craftsman (?) with the booth in one of the courtyards of the Yu Gardens complex in Shanghai.

Osama Bin Laden, made out of dough, in a shadow box

This is part of the Yu Gardens, a complex of pavillions and alleyways opening onto courtyards. It is the ultimate TOURIST TRAP for both foreign and domestic visitors. In the warren of stores, you can buy everything that makes “Made in China” conjure up tacky, plastic, or disposable… but you can also find bargains to adorn every part of body or household.  If you know how distinguish the genuine from the copy.   And can bargain. Really bargain.   Like much in Shanghai, the absurd and the traditional are often in the same frame, leading to some very odd sights (such as the Gumbi-like plastic character in the photo). Below is another view of the buildings.

It’s easy to forget that Shanghai attracts DOMESTIC tourists as well as foreigners. Or that many who work in the city are peasants, economic migrants leaving hardscrabble farm lives for the factories (and sights) of the big city. For them, the weekends are a time to come out and gawk too. And dote on their children, like the two here on the bronze back of a mythological creature in the complex. 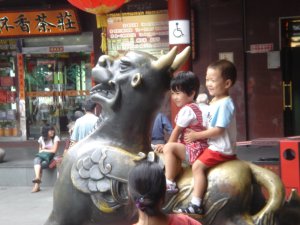 The signature feature of the Yu Gardens complex is the famous zig-zag bridge connecting shops with more shops. The bridge spans a very large Koi fish pond (various photos below), where Koi of various sizes (up to almost 2 feet!) and colors swarm towards the fistfuls of fish-pellets fed to them by the onlookers. There is nothing serene about the commercial part of the complex, though there is a private garden – the original Yu Garden – one can walk through for an entrance fee.

Another view of the “zig-zag” bridge. 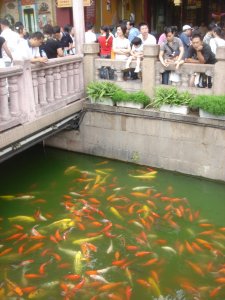 Closeup of the Koi 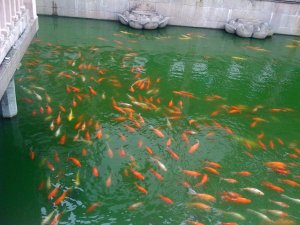 This shot of the bridge was taken from second-floor “Famous Shanghai Dumpling” restaurant where I ate with my guide/interpreter, Yrain (pronounced “Rain”, a name she made up that sounded like her Chinese name).  Sadly, while the food was visually interesting, the flavors were not. One unusual dish was the large dumpling with the straw sticking through the middle. The contents, soup with bits of bits, are slurped through the straw.

And if there are Starbucks on (almost) every corner, should it be a surprise that Hooters is far behind? Of course, given the raison d’etre of Hooters, it IS a little weird since Chinese women aren’t known for being, er… “endowed” in that way. 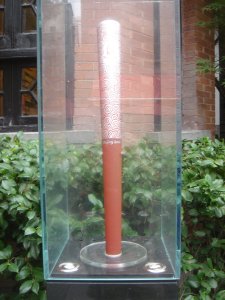 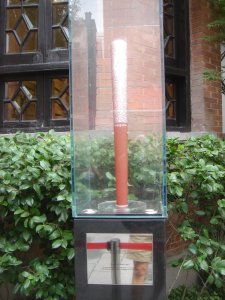 In another shopping area – Shanghai is to shoppers what crystal meth is to an addict – I came across…an Olympic Torch! Yup, a genuine, carried-through-the-streets-by-a-deserving-person (in this case a wealthy Shanghainese with connections) Olympic Torch. It looks like a curved aluminum baseball bat, with an orange handle.

Shanghai is a city of neighborhoods that range from the very old to the very modern. There are skyscrapers galore, almost as far as the eye would be able to see on a clear day, if there were such a thing there. It’s a city of almost 20,000,000 people – yes, that’s SEVEN zeros, so they all live somewhere. (For a little perspective, China, back in March, had 173 cities with OVER one million in population. The U.S. has…9 (nine). China’s land-area is almost EXACTLY the same as the contiguous 48 states, yet it has FOUR times the population (roughly 1.2+ Billion vs. 300+ million). You do the math. Imagine the entire population of the USA squeezed into a 200 mile swath along our East Coast: that’s the population density of China’s coast, from below Hong Kong all the way up to Tientsin (old spelling), the port for Beijing.

It’s the co-existence of that “old” (which is still visible) with the new that makes Shanghai so much more interesting to me than Beijing. My parents lived in Shanghai for the four years (1945-1949) immediately following the end of WWII. They knew it as a chaotic, vibrant, commercial and business center, a bit beaten up by the Japanese occupation, but still full of an energy that reflected its early status as a cosmopolitan window into the wider world. Walking down some of the older parts near the French Concession neighborhood, I could see traces of that chaos away from the fancy office towers that have sprouted everywhere. And that co-existence and contrast encapsulates what China is today.

Lastly, no snapshot of China is complete without at least one example of “Chinglish”, that wonderful phenomenon of translations gone bad. This one was just a few blocks from the Westin. I shudder at what goes on in there… 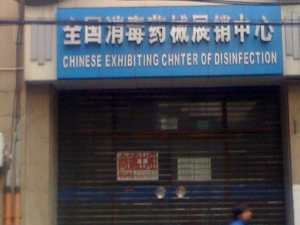 It's all in my blog....
View all posts by Drachenfutter →
This entry was posted in Uncategorized. Bookmark the permalink.